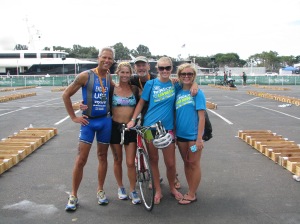 In October I had the awesome honor of representing Team USA in Auckland, New Zealand at the Triathlon World Championships with Scott Endsley and his wife, Wendy. We talked triathlon and solved the world’s problems while marching in the Parade of Nations a couple days prior to our races.

Craig: What was your athletic background before you got involved in triathlon?

Scott: What with the little brother syndrome, I have always been chasing my older brother around, trying to participate in his favorite sports, which were most of the American pastimes. I didn’t really focus on anything, other than winning awards along the way in various sports I tried, including basketball, baseball, football, track, cycling, swimming, bodysurfing, etc. I became serious about tennis in high school, played tennis on the National Championship tennis team at UCI, and played pro tennis for a short stint, until I had a freak accident playing basketball, which ended most of my ball sports possibilities.

Craig: How did you get started racing triathlons?

Scott: Once my knee couldn’t stand the pounding required on concrete tennis courts, I knew I had to find something I would equally love, and that would keep my muscles twitching. I fortunately stumbled upon my first triathlon in 1978! A friend explained: “Hey Scott, come out to UCI tomorrow and do this crazy ass event with me. All the chicks get naked when they change their clothes between when they run and then bike and then swim at the UCI pool!!”

Not believing a word of it (remember this is conservative OC during the ‘70s), I showed the next morning with only my running outfit, and a bike that weighed 35lbs, a Dawes special. Not being a long distance runner, I was surprised when everyone took off sprinting for the 6 mile hilly run. Although in excellent condition, I was soon in the middle of the pack, with the tongue a wagglin’. During my early twenties I would ride centuries without ever measuring the distance, just “cus it was a gas”, and delivered newspapers, with 100lbs of them on a one speed Schwinn. Needless to say I crushed the bike, and caught most of the competitors. But honestly, the transitions were extremely distracting with all the naked beauties for this 23 year old, so I think by the time I finally made it to the pool, I was “firmly” focused on other things than winning the race. Passed and dunked by every UCI water polo and swim team member (6 of them went on to swim in the Olympics), I was one of the last “leaders” to exit the pool. Nothing like anything I have ever done, before, or since. My first of 300+ triathlons to come!

Craig: What athletic accomplishment gives you the most pride?

Scott: I always just did tri’s for fun until 2004. My knee was showing continuing signs of constant disintegration, so I thought, “Why not finally try to be competitive?” I tried to workout with more consistency, everyday, with the goal of winning the National Triathlon Sprint Championships that year. I did win, and was fortunate to compete in 8 more nationals and 4 World Tri Sprint Championships since then. My right knee remnants, (no medial or lateral meniscus, 4 bone on bone lesions chipping badly etc.) finally forced me to the sixth of nine right knee surgeries, a genetic knee replacement, which partially repaired the bone surfaces, but still no meniscus. That was right after winning the Nationals in 2004. I had to dig hard in that race, what with the knee, and a two minute loss coming out of t2 (with unwalkable pain from double hamstring cramps caused by a water bottle cage that snapped, losing all my water, in the first mile on the bike, in 100 degree heat and 95% humidity, in St. Charles Louisiana.) One of my best come backs ever.

Craig: On October 22nd you and your wife, Wendy, represented Team USA at the ITU Sprint Triathlon World Championships in Auckland, New Zealand. How did that race go for both of you?

Scott: My wife and I really enjoy representing the USA in our foreign triathlon events. New Zealand was amazingly beautiful and friendly and despite the rains and winds, we placed in the middle of the pack, which was anticipated. We were both injured so we were pleased with our results.

Craig: What other destination races have you done?

Scott: I have competed for Team USA at the World Championships in Australia, Hungary, China, and New Zealand. My highest finish thus far is 13th at the Worlds. Unfortunately, I have had leg injuries in each of the Worlds thus far. I hope to be injury free for the Worlds in 2013 and 2014, when I turn 60 years old. I hope to be in the top 10 in the world when I age up.

Craig: You ran into a “minor” complication on your way to New Zealand. What happened?

Scott: Sometimes you have to plan for the unexpected, if you wish to travel the world with minimum stress. Our trip most recently to New Zealand was planned that way, so we had given ourselves 5 extra hours to get to our plane leaving from LAX. Strapping down the TCSD double bike case in the car trunk was a full body weight against bungee cord tug-a-war, and then suddenly, the bungee decided to win! It slipped off the car where attached, slammed into my soft inner forearm and fish hooked itself, completely impaled by the two inch long metal hook, directly into the vein! When I screamed to my wife and neighbors, “call 911”, and quickly removed the hook, the vein gushed four feet in the air, and I thought, “not only may my race be over, but I may not live to see my next race”. I was able to put massive, immediate pressure on the filleted arm, and stopped the bleeding and didn’t pass out, until the ambulance arrived. Fortunately, the emergency room doc at Scripps recognized me, heard about the Worlds we were supposedly leaving for that hour, stitched me up, shot me for tetanus, and told me, “I am supposed to tell you don’t get those stitches wet for 14 days, but since you confessed that you will do the World Aquathlon Championships in three days, and the World Tri in 7, I promise not to tell your mother on you. Here’s the stitch removal kit, so you can be your own surgeon after the tri. Good luck mate!”

We made it to the airport on time, and even had a great dinner in LA before we flew. Hope for the best, plan for the worst, and your tri’s will usually be less fraught with issues, we have learned from the school of hard knocks.

The toughest part of the New Zealand races was the tetanus shot, as I couldn’t lift my swollen shoulder over my head to swim. More amusing than painful, really.

Craig: You have managed to race these past few years on a serious knee injury. What unique steps have you taken to resume your racing career?

Scott: My right knee, without meniscus continues to plague me. I find swimming and biking are health aids and running is detrimental, so I maintain my best running condition by running minimally, only on soft surfaces and in the pool. Pool running is the best aid for anyone with leg injuries desiring to keep their running form. I say, “don’t stop driving your Ferrari just because it’s got some quirks. It is still, and always will be a Ferrari, if you treat it as such.” I plan on doing tri’s until I’m dead! Missing parts be damned.

Craig: Over the years you have coached many triathletes. What has been a common theme that you have found to be the most helpful, especially for the new triathletes just getting started?

Scott: Over the 34 years of doing triathlons, I have brought hundreds to the sport and coached hundreds in the sport. Never charged a penny; just loved it, and my mates too much. I think the greatest thing to realize and practice as a triathlete, at any level, beyond the basics of proper training, is to RELAX, ENJOY, BREATH, AND BE IN THE MOMENT FULLY. LET NO DISTRACTIONS IN, DURING YOUR RACE, AND YOU CAN EXCEL BEYOND YOUR ANTICIPATIONS. WE ARE ONLY LIMITED BY OUR THOUGHTS. Easy said, not easy done. Perfect practice makes perfect.

Craig: Your step daughter, Elizabeth Lam, races for Tri Juniors. Why has this been such a good experience for her?

Scott: Tri Juniors is wonderfully coached in San Diego by our own Jim Vance. Any kid that gets a chance to train with him or any other qualified tri coach should jump at the chance. Their life will be positively changed forever. Confidence, self worth, self awareness, teamwork, excellence, fortitude, and self appreciation will all increase with a young malleable mind being thrust into the melee of a pontoon swim start, the dangers of a draft legal bike, a gut wrenching run, and the celebration with your buds and family at the finish line.

Craig: What do you see as the future of triathlon?

Scott: Worldwide, every human being, and some family pets will be triathletes before 2025. Anything wrong with dreaming? Tri is presently the fastest growing sport nationally and internationally. That trend will continue ad infinitum, I believe. I believe in humanity.

Craig: Who are your current sponsors?

Scott: I am sponsored by many of the “enlightened” sponsors, that realize that the future of tri is in the hands of the age groupers; US! Xterra, Nytro, Hi-tech, QR, Rudy, 2XU, and others have helped with product and support, and I am very grateful.

Craig: What are your triathlon goals for 2013 and beyond?

Scott: I would like to continue to win some local races, do well at the Nationals and Worlds in 2013, and place at the 2014 Nationals and Worlds, if the stars are so aligned. Hopefully with family and friends all participating with smiles with me! That would be sweet indeed!

Craig: Scott, thank you so much for sharing your story. Take care of that knee and watch for flying bungee cords! Good luck to you, Wendy and Elizabeth with your racing!