Craig and Laurie enjoy a vendor’s booth at the Boston Marathon Expo. 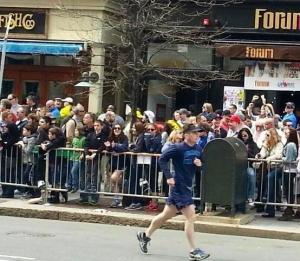 Moments before the bombs go off at the 2013 Boston Marathon.

On April 15th my wife, Laurie, and I were in Boston for the marathon. Laurie finished her 17th Boston Marathon 1 hour before the explosions. I have done the race 10x’s in the past, but am injured now with plantar fasciitis so I was just there to support her. We were safe in our hotel room 600 meters from the finish line when the bombs went off. We did not know anyone personally who was injured. For that, we give thanks. We are certainly praying for those impacted by this horrific act.

Here is our story from that day. The bombs exploded at 2:50pm. We left the Boston Park Plaza at 3:10pm and walked west to the Prudential Center to meet up with Laurie’s parents for a meal. We noticed a lot of ambulances with their sirens blasting as we walked, but we still had no idea what had happened. The streets were packed with people, but that is always the case at this hour on Patriot’s Day. We were actually prevented access into the Prudential Center so we continued on to a restaurant just down the street. Upon walking into that restaurant at 3:30pm we spotted a television that had live pictures from the finish line with the breaking news that there was an explosion at the finish line and many people were seriously injured. Now we knew.

During the 90 minutes we were in the restaurant a couple of announcements were made over the loud speakers that urged patrons not to go outside. We could see outside and the streets did have a few people walking around. But especially notable outside was the police presence. And the police really had some big guns. They were taking this very seriously. The fun of this year’s Boston Marathon was clearly gone.

We finally left the restaurant to walk Laurie’s parents back to their hotel 2 blocks away – the Marriott Copley. Security would not permit us in through the front door, but they did let us in through the back security entrance. Of course, this was only after making certain we had a Marriott room key. They took us up to the Kearney’s room on the 36th floor using the freight elevator. We watched President Obama speak on television and then walked back to our hotel while it was still light outside. Again – lots of police with really big guns!

The following day was a beautiful day, but there was a somber mood to the community. We really had no problem flying out of Logan International Airport the following day. Homeland Security had staff stationed at the airport security area asking travelers for any information about the bombings.

We happened to be there. But we are no different from you who might have been thousands of miles away. We all were violated by this. We will rally and come back strong. We owe that to those who perished or had their lives forever changed.

Prior to this year’s race I kind of figured I might not run Boston again. Afterall, I had done it so many times and the marathon is not my focus anyway. But the happenings on 4/15 have absolutely steeled my resolve to do the race again next year. Laurie is from New York. I am from Chicago. But Boston, because of the marathon, has become a big part of our lives. We love that city, those people and that event.

It gives me great pride in our country that the cowards were caught. And caught so quickly.

Our network of family and friends really is a family. Many of you have reached out to us to make sure we were ok. That has really made us feel loved. We are grateful for that. Thank you!

On April 20th I received the email below from my friend, Paul Martin. I originally met Paul at the 1996 San Diego Triathlon Challenge (aka the Challenged Athletes Race) and we have stayed in touch ever since. That is the best benefit of our sport – making friends that last a lifetime.

Paul currently lives in Colorado with his wife, but he was raised in the Boston area so the attack hit home for him. Sadly one of Paul’s friends lost her leg in the attack. Please read the email below. I have verified with Paul that this is legitimate.

It would be great to see some financial support for Roseann in her time of need, but please don’t feel any obligation. Thank you!

A friend from college, Roseann Sdoia, a sorority sister of my college girlfriend, is a victim of Monday’s insanity and now faces life as an above-knee amputee. One of her sorority sisters, Christine, set up this site to help with medical expenses. Please contribute what you can.

Christine put out this photo today along with these words:
“I have attached a photo from Monday. You can see Roseann to the left of the mailbox behind the marathon runner’s shoulder. She has blonde hair with sunglasses on and a gray sweatshirt, turned speaking to a friend. You can see the white hat suspect behind her to the left looking away from Ro. You can also see the bag with the bomb on the ground next to the red Nike sneakers. The 8 year old boy that died is in front standing on the bottom rail of the fence. Roseann’s friends are on the right of the mailbox. The mailbox saved them from severe injuries but they have all lost hearing due to blown out eardrums.”

I had forwarded Paul’s email to my network of family and friends. On April 24th I got an email reply from my Chicago area swim friend Andy Seibt. Andy said that the 3 girls standing between Ro and the 8 year old boy are Tufts Lacrosse players. 2 of them are daughters of a swim friend of Andy’s. As soon as the 1st bomb exploded they ran away from the location and were about 30 feet from the 2nd bomb that went off. That quick run probably saved their lives. The 3 girls have serious shrapnel wounds to their legs and 2 suffered concussions.