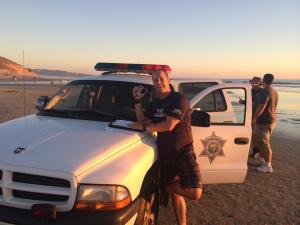 Craig: What sports did you do as a kid?

Jay: Growing up in South Carolina I did what normal kids my age did – played baseball, soccer, football, swam, biked and hunted. (I did say I was from South Carolina). On my 12th birthday I was given a surfboard and my love of surfing started. It had a big impact on my life and in college, I co-founded the “Surfing Club”, which is funny because the University of South Carolina was about 2 and a ½ hours from any beach! Also in college, I lifted weights regularly and became the VP of our Body Building club. I never competed but enjoyed the commitment and camaraderie of the members. Fast forward to today, there are some sports I don’t do often (weight lifting) and others I do frequently such as surfing, SUPing (stand up paddling), yoga, mountain biking, snowboarding, road biking and of course, triathlons.

Craig: Where did your career take you prior to moving to San Diego in 2005?

Jay: After graduating college with degrees in Marketing, International Business and Spanish I moved to Los Angeles and worked at several advertising agencies during the Dot com bubble. After getting laid off at one of the agencies when we lost a client, I decided to get out of Account Management and go into marketing where I traveled the country doing promotional marketing for clients such as Coca-Cola, Proctor & Gamble and Nestle. I’ve been to every state in the contiguous US and look forward to going to Alaska and Hawaii at some point soon. While traveling the country I came to San Diego for work, where I fell in love with the city and chose to make my home here.

I made another career decision in January of this year, when I decided to get out of marketing after doing it for 17 years and get into sales where I can control my destiny and be rewarded for performance. Currently, I work for an online registration company called, RaceIT, which is owned by Competitor Group. [shameless plug coming…] If you, or anyone you know, are organizing an event and need online registration, let’s talk. 

Craig: TCSD Cares played a key role in your first triathlon. How did TCSD Cares help you?

Jay: In July 2010, I took some time to evaluate happiness in my life. I’d love to tell you that I’m happy 100% of the time but you and I both know that I’d be telling a fib. After evaluating my life, I decided I wanted to make significant changes – work, where I live, who I’m surrounded by and what I do for enjoyment. Triathlons were always on my “bucket list” when one day I told myself to stop talking about it and start doing it; that same day, I found TCSD Cares and met some of the best people I know to this day.

In addition to TCSD Cares, I also fell in love with the sport because it allowed me to meet active, motivated people who share the same values as me. As many people can tell you, I’m highly competitive but what I find most rewarding in this sport isn’t winning (mainly because I haven’t won yet). It is: 1) every age and shape is passing me! 2) my competitors are cheering me on, sharing their training and nutrition tips, and 3) it’s a competition with yourself and everyone wants to help you do your best. I can tell you after 30 years of surfing; most surfers are not like that.

My first race was Solana Beach Sprint Triathlon in July 2011 where I finished 1:02:30. My second race was the Mission Bay Sprint Triathlon in October 2011 and then I decided to sign up for the Oceanside 70.3 in March 2012. Most of my TCSD Cares teammates were doing it so I thought why not!? I had done a couple of races, I like the sport and it seems like a good idea, right? Yes, it was a GREAT IDEA! It was one of the hardest things I’ve done both physically and mentally and I learned so much about myself during training. It was phenomenal! Although I didn’t hit my goal (I wanted to finish in less than 5 hours), I did complete it in 5:13:15, which is pretty darn good in my book.

Craig: What has been the most challenging race you’ve done so far in your triathlon career?

Jay: Since doing my first race, I’ve done several sprints and a few 70.3’s and WILL do an Ironman; however, I must say that my most challenging race was Wildflower 70.3 in 2013. After coming off a very disappointing race for me at Oceanside in 2013 where I didn’t have my nutrition dialed in, I had high expectations for Wildflower. I was well-trained, had identified what went wrong at Oceanside and worked with my coach and nutritionist to correct the mistakes…I was ready. Or so I thought.

What I didn’t account for though was the heat and how important it is to know the course. After transitioning to the bike and rapidly moving on the bike course while drinking my nutrition with my right hand, I noticed there was a 90 degree turn ahead. Unfortunately, I didn’t have time to put my bottle back and I didn’t want to clamp down on my front brakes and crash end over end so I decided to ride up the side embankment and back onto the course. Well, it worked out much better in my mind than it did in reality because I rode up the embankment only to roll sideways down it. That was the start of my bike course!

When I began to run the temperature had reached 95+ degrees and not letting that stop me I pushed myself hard through it; however, after only a few miles the temperature sucked the energy out of me and I ran/walked the remaining miles. Those who know me know, I don’t walk during a race. That day, I walked. I walked A LOT and it was a humbling experience for me, which I greatly appreciate now because I learned more about myself than had I finished as planned.

Craig: Do you have any triathlon advice that falls into the category of “what not to do”?

Jay: I’ve been very fortunate that I haven’t made too many big mistakes. What I’d say is:

**Train hard but don’t take yourself too seriously. One time I had a “great idea” and convinced several of my fellow TCSD Cares group to run our second Solana Beach triathlon in speedos that I had imprinted with “Team Solana” on the butts. The joke was on me though because only 1 other person ran in a “Team Solana” speedo. Here I was doing the course with the whitest legs you’ve probably ever seen with people chuckling as I passed by them. Needless to say, former TCSD President, Brian Long, took a photo and turned it into a photo caption contest. The winning caption read “Cutting leg holes in my (Brian Long) swim cap worked great”

**Don’t sit down in transition to put your clothes on, which a TCSD Cares’ alumni, Laura Kirkby, very passionately expressed to me during my first ever Beginner Triathlon.

**Don’t take your hands off the handlebars before knowing what turns are coming up.

Craig: What is the best advice you can give to someone in the sport?

Jay: Here are a few:

**Ask lots of questions. Remember, there are no stupid questions. I promise you, there’s someone who’s asked the same question, done what you’re asking about or knows someone who has done it.

**Train with people who are better than you.

**Never be afraid to fail.

**There’s no such thing as failure unless you don’t learn from it.

**Remember that we are all doing our own race, which is especially helpful if you are getting passed.

Craig: What volunteer roles have you done since you joined the TCSD and what are your perspectives in serving as a volunteer?

Jay: As you can tell, when I decide to do something, I jump in with both feet. When I first joined TCSD I did the normal volunteering stuff – getting to meetings early to help put food out, set up tables and staying late to fold chairs and help put items away. Things changed pretty quickly when I decided I wanted to get more involved with the club that gave me so much.

In August 2012, I was asked to help present the “Intro to TCSD” to members who were new to the club, are thinking of joining or veteran members who want to learn more. Also in August, I became the Aquathlon Race Director and put on the Aquathlons during the summer.

I’ve been doing those two volunteer duties for the last 2 years and at the time of writing this, I’m running for the Programs and Events Director position on the Board because I feel like I can continue to make a positive impact on the club and its members.

What is my perspective on volunteering? I highly encourage everyone to do it, whether you’re new to the club or you have been a member for many years and here’s why. As a new member to the club it helps you identify and bond with other persons volunteering because you share a common goal. For someone who’s been a member of the club for a while, you have such a wealth of knowledge that may not be evident until you begin to share it with another person. Moreover, volunteering will help you understand the intricacies involved and help influence the direction of the club.

For example, running for a board position and increasing my volunteer commitment helps me be a part of the solution versus one of those people who just gripes/talks about what they’d like to see changed. One of the quotes that I choose to live by is from Mahatma Gandi, which says “Be the change that you wish to see in the world.”

Craig: What has been the most rewarding aspect of being a TCSD volunteer?

Jay: The most rewarding aspect of being a volunteer is seeing how you’ve changed someone’s life after you’ve helped them. I have the honor of seeing this change in many forms.

At the “Intro to TCSD” meetings it’s everything from watching the facial expression of someone who’s new to the sport go from “what the heck was I thinking” to “I can do this;” seeing, hearing, watching someone complete their first race; giving guidance, answering questions, increasing one’s comfort level and even hearing a veteran member tell me after our Intro meeting “wow, I just learned something new about TCSD”.

During the Aquathlons, I see p¬¬eople change from being quiet and stressed after a challenging day to having a relaxed demeanor, laughing, socializing; knowing that they are in good hands and that everything has been thought of. Additionally, it’s their comments about what a great time they had and it’s them sharing pictures with family/friends about the event.

I hope that more people volunteer and have the opportunity to experience this.

Craig: Jay, you have made such a positive contribution to the TCSD in a very short time. Thank you for all you’ve done thus far and thank you for your continued service. It’s just a matter of time before Mike Reilly says “Jay Lewis, you are an Ironman!”